The other day I thought it might be fun to do posts on breastfeeding as part of breastfeeding awareness week, so I turned to Google to find out just when it was.  In a serendipitous turn of events, I discovered it is this week.  This post is the first of two posts on my experiences with breastfeeding my two children.  Part two will run sometime later in the month.  To my small number of male readers, you are welcome to read it, but if you prefer please feel free to skip (except for my husband, he doesn’t get off the hook so easily, ha ha).

Before the birth of my son Samuel, I anticipated a smooth breastfeeding experience.   I had read several books on the topic, and even practiced various feeding positions with stuffed animals.  There was no doubt in my mind that everything would work out fine.  After all as I had read, every woman can breastfeed if they just try hard enough . . .or so I thought.

Then my son was born, and all my preconceived notions began to crumble.  The birth process was surprisingly easy, and I fully expected breastfeeding to follow suit.  After all, this is what my body was designed to do.

My son lost 12 oz. of his birth weight in less than a week.  I tried to remain calm, telling myself that he would regain it all and then some.  Even after my milk came in, however, his wight gain was very slow, and even non-existent for several days at a time.

In frustration, I turned to my local La Leche League to find answers.  At the first meeting (and every subsequent one) I was told the problem was two fold; first, I must not have a good latch (though the leader admitted that everything looked good on the outside) and, second, I just wasn’t nursing enough.  Finally, I was told not to supplement any feedings with formula, lest my supply be further jeopardized and to pump whenever my son napped.

Over the next few weeks, I watched videos about latching on, nursed as much as possible (we were actively nursing for 16 hours a day), and pumped about twice a day.  Still my son did not gain weight.

All the while the doctors were running tests to see if my son had a genetic disorder to explain his poor weight gain.  Sammy was producing the proper number of soiled diapers, so we assumed he was getting enough milk.  I felt physically ill with worry, both that my son might have a serious underlying health problem, or that his inability to gain weight was my fault, and that failure to nurse exclusively would result in a serious health problem for him later in life.

Finally I got a referral to a different lactation consultant whose practice was an hour and a half away from my house.  Desperate for answers, I made the drive down. 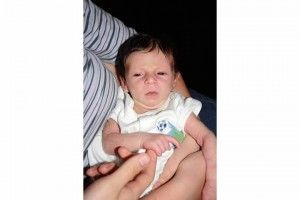 Sammy at his lowest weight. It pains me to see this picture.

There I found out the news I was both dreading and hoping to hear: I had lactation failure.  It isn’t common, and is a very poorly publicized condition for fear that many women will prematurely presume they have it and stop attempting to breastfeed.  The La Leche League leader I  previously saw did not mention the possibility once, and even my doctor was not familiar with it, I was the first case he had ever seen.

The lactation consultant told me very gently that although breastfeeding is ideal, the most important thing was to make sure that my son got the nourishment he so desperately needed.  We talked about several strategies for trying to maintain my supply, and she gave me a supplemental nursing system so that I could feed my son formula while continuing to breastfeed.

Now that I knew I had done everything in my power to breastfeed exclusively, I was at peace with supplementing.  The results were dramatic.  My son began gaining weight at a rapid pace (up to a pound a week for the first few weeks).  His cheeks began to fill out and he became such a happy baby.  From what I can tell, I was able to continue to provide him with 1/3-1/2 of the milk that he needed, and we supplemented the rest.  Now, nearly three years later he is an energetic, intelligent toddler. 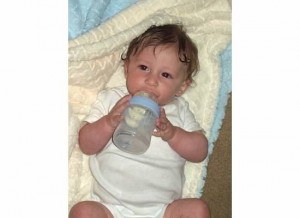 My purpose in sharing this information is twofold.  First, I want to raise awareness of the condition so that other emotional, exhausted mothers might find answers sooner than I did and be spared watching their child suffer.  Secondly, I want women who are experiencing this to know that they aren’t alone and to share a few pieces of advice:

1. Get Help.   If you are having any problems with nursing or your infant displays poor weight gain, get help right away!  See a certified lactation consultant, they can be so amazingly helpful in managing breastfeeding problems.  If I had seen one sooner, my son would have been better off.

2.  If necessary, don’t be afraid to supplement.  Breast may be best, but what your child really needs is nourishment.  I was so hung up on making sure my son got the best possible source of nutrition that I was unwilling to experiment with adding in supplemental feedings.  It wasn’t until the lactation consultant told me that it was necessary to supplement that I gave myself permission to do so without fear.

3.  Forgive yourself!  After we started supplementing, I couldn’t stop playing thoughts in my head about how I had failed my son, how I wasn’t able to provide him with this one thing that I so desperately wanted to.  It took me months to forgive myself.

As parents, we want to give our children the best, and when we are unable to do so it is devastating.  But do you know what the most precious gift you can give your child is?  Your love and affection.  Focus on all the beautiful moments you are able to share with your baby. Forgive yourself for not living up to your idea about what you “should” be able to do as a mother.  You are just the right mom for the job of parenting your child.  You are not defined by your failures, but by the fierce and devoted love you give.  That love will have a greater impact on your child’s life than breast milk ever could. 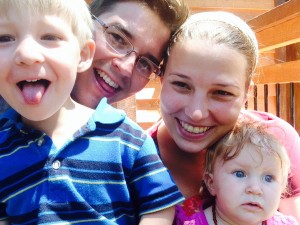 Our silly Sammy, goofing off for the camera.

Have you ever breastfed?  Ever struggled with undersupply, or oversupply? Please share your experiences (both positive and negative) in the com box.  Sometimes it can be so reassuring for other women to see that others share their difficulties.

A few disclaimers: I am not a doctor, and this is not intended to be medical advice.  If you think you might have lactation failure, see a professional immediately!

Also, I do not mean to disparage La Leche League, I have a few friends who are leaders who helped me troubleshoot more minor problems I had later on.  For smaller breastfeeding issues or general support it is a great organization.

If you are going through a similar situation, please feel free to get in touch with me through the contact form, I understand that it is a hard burden to bear and would be happy to offer emotional support.

If you found this post informative or encouraging, please consider sharing it with a friend!